It goes with the nature of our industry that we live webcast a variety of things in many different industries. This can be anything from corporate events, live stream a sports events to recently live webcasting a brain aneurysm.

Setting up the cameras was simple, after discussing with the surgeons, we came with up with the idea of mounting an HD commercial grade camera to a rod on the operating table to get an up-close view of his hands. The head surgeon wore a lapel microphone during the procedure to explain what was going on.

A second camera was placed at the rear of the operating room to capture a wider angle, which the switcher operator would change to this view during less critical parts of the operation.

If you would like to discuss what we could do for your business, organization or anything you would like live webcast. Get in contact with the Australian live streaming services professionals at GO LIVE Australia.

Camera mounted to the operating table 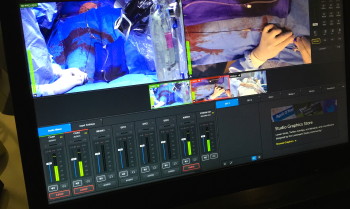 Switching to multiple angles during the procedure