1980’s Australian rock band Midnight Oil announced on Friday the 17th of February their first world tour in over two decades. The world tour called the Great Circle 2017 was announced in true rock star style on the back of large a wooden passenger boat on the Sydney Harbour. With their backs facing the iconic Harbour Bridge and Opera House, camera men and reporters faced the band on the upper deck platform and asked detailed questions about their up and coming tour and CD release.

This tour, which is due to start in mid April, will kick off at a smaller intimate local pub (with details to be announced later) then continue their live shows around the world at over 30 locations including Sao Paulo, LA, London and Paris. They will be playing at festivals with other large international acts like Arcade fire, Sting, and the Pixies to name a few. They return home to play 18 Australia concerts through out the country with Great Australian bands like John Butler Trio, Adilita, Birds Of Tokyo, The Living End, Something for Kate, Spiderbait, Urthboy and Frank Yamma.

The press release was broadcasted on television stations ABC, Seven, Nine and Ten with Go Live on board (No pun intended) to Live stream on Facebook’s live streaming platform Facebook live stream. The benefit of hosting the conference on Facebook live was that MNO fans on social media were present to receive the good news Live of the up and coming tour and interact and asked the band questions about what they have been doing personally since the last tour.

For this Facebook streaming event, we used a three-camera set up, wide, tight and a camera clamped to an upper deck ladder to get the stunning Harbour Views. These feeds were sent to back to our switcher to be mixed with Audio, Watermarks and holding slides to give notice of when the Facebook streaming will commence. During the Facebook live streaming event it gained 40,000 views and over 200 shares. Presently this video has over 271,000 views and 1600 shares, which is continuously increasing.

If you are interested hosting a Facebook streaming event. Give us call to enquire about what we can do for you. 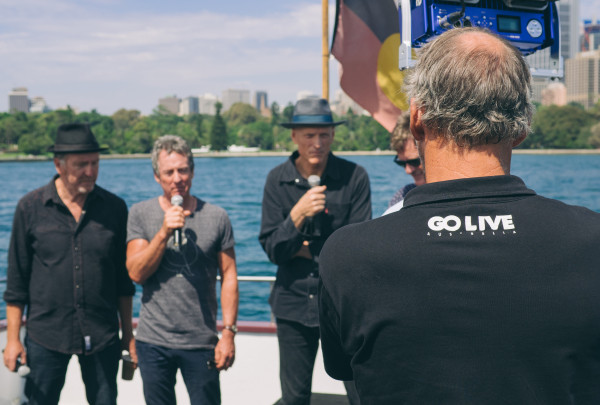